We can learn a little something from In-N-Out Burger. Yup, that burger chain.

In-N-Out doesn’t embrace the typical fast food marketing. No TV ads, no celebrity endorsements. Instead, they rely on the strength of their brand, which they protect vigorously.

The company is known as a “west coast only” chain that serves up one of the best burgers in the US. They have a stubborn reluctance to blanket the nation with stores in the name of quality. This elusiveness only drives up the mystique, demand, and cult following of the brand.

And recently, In-N-Out has started spreading the word to the rest of the world.

No, In-N-Out isn’t expanding internationally. They are, however, opening popup stores as part of a marketing campaign. Over the past year, such stores appeared – just for a day – in cities around the world. And they all ran on the same playbook.

1) Partner a local burger joint to house the popup store. 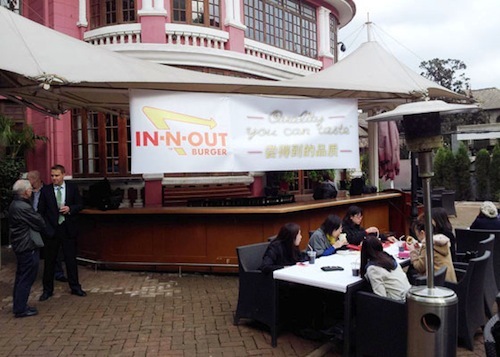 2) Run a low key ad in the local newspaper the day before. 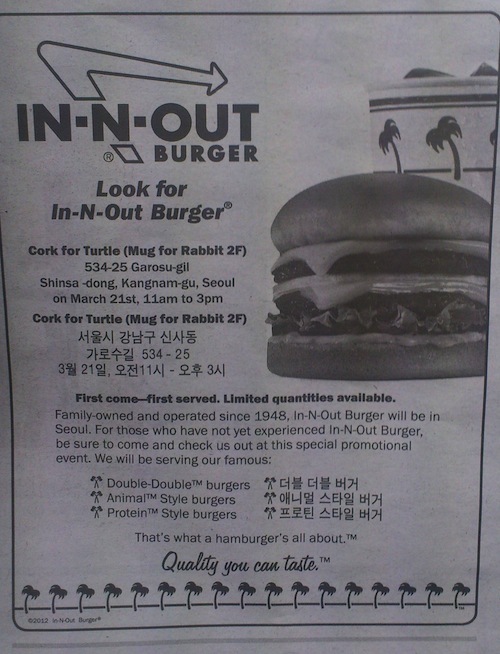 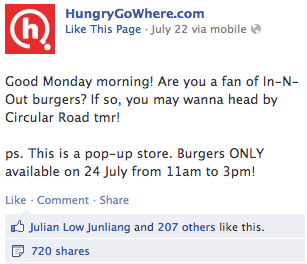 4) Watch the crowds roll in. 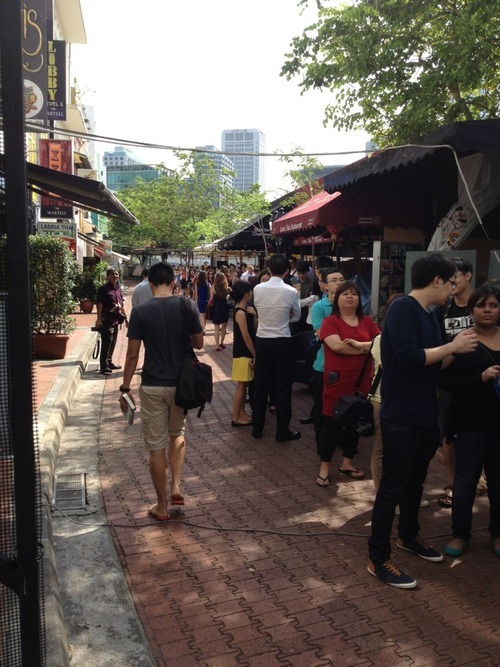 How does a humble popup work as a marketing tour-de-force for In-N-Out? Let’s take a look.

Popup stores opened in cities like Shanghai, Hong Kong, Singapore, Tokyo and Sydney. Now these major cities all have a couple of things in common; they are densely populated, and concentrated with

Locals and expats who have experienced In-N-Out first hand.

People who have heard about In-N-Out but have never tried it.

Potential visitors to a US city with an In-N-Out.

This is a potent combination. Combined, they help

At the In-N-Out popup store in Singapore, 600 people stood in line. Only 300 burgers were available. They were snapped up in 5 minutes.

From a practical standpoint, In-N-Out could have easily stocked up enough burgers for everyone, and opened for the entire day. But where’s the buzz in that?

By selling out early, In-N-Out had people talking in the aftermath. They had the press – both local and foreign – churning out articles covering the insane lines and “record sell outs”. All while keeping up their trademark elusiveness.

People would have readily paid ridiculous amounts for an Double Double Animal Style. Yet, In-N-Out kept their prices reasonable, and even comparative to other chains in the city. With that, they conveyed a consistent message to their customers – affordable, quality food for everyone.

The US saw over 60 million international visits in 2011. California alone hosts 13 million of them. That’s a huge market to tap into.

[These events] are just one part of our efforts to promote and expand our brand as well as determine the best way to continue reaching out to customers around the world.

Thanks to this, I’m sure we’ll be seeing a lot more tourists making pilgrimages to In-N-Out. It’s a brilliant move by the burger chain.

Your Users Aren’t You

As with any review site, we had to deal with user ratings. In our case, our users rated a place between 0 (bad) to 10 (great!). One straightforward approach to aggregate ratings is to use a simple average. But that comes with an inherent... Continue →